Pete Under Investigation again by MLB !!!

The cause of the laughter is Under investigation by MLB...knowing us silly Cincy boys,I think this effort by MLB to find a chink in Petes Armor may easily be explained by checking his choice of Skyline Chili last night. Probably a 5 way by as evidenced by the blurry eyes and Unbridled Laughter. Just sayin' ! :)

MLB now has ownership in Fan Duel, a legal Fantasy/Gambling site : For the Fantasy Sports peeps that also Gamble, proudly, I do neither. They (MLB) not only promote and advertise Fan Duel all over the stadiums they are also making money off your desires to gamble with your lineups you pick. Fan Duels claim: "Immediate Cash Payouts ($2B this year)" . From NBC Sports: "Depending on how (you define) gambling the NBA (& MLB) runs a sports book". *
So:
- MLB is promoting gambling on its Product
- MLB is making $$$ off of your desire to lose your $
- MLB has embraced this form of gambling directly from its product.
- Just recently an employee of Fan Duel has been indicted for insider winning, even hooking up family members. So your money is being swindled lol

Tell me how long it will be until (probably happening already):
- Vegas sneaks a piece
- A players wife wants some "action" and ask hubby pro ball player for advice etc etc: see the slippery slope ?

This blog is not about MLB or the  NBA becoming sports books, it's about MLB' hypocrisy:

MLB is keeping the all time Hit King on the permanently  ineligible list for gambling on baseball , which they are now vigorously promoting. Hold your horses Cincy haters, I'm not talking about Pete
being right for gambling on the Reds to win. Ok? He was and is wrong and has paid the price for 25
years.

Go ahead and promote gambling MLB, just be aware some of us who do not partake are SMH at your slippery hypocrisy ;)))

Posted by Unknown at 10:06 AM No comments: Links to this post 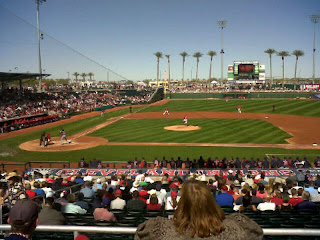 
@CincyGy: sweet new graphics on @AtBat2012 as I tune in the the Dulcid Redneck tones of The Cowboy on @WLW #Reds on Radio http://t.co/wIgHa5iO


@CincyGy: As Marty B said 500 SO's between Heisey/Stubbs/Bruce "ain't gonna cut it" especially in GA Small Park, be disciplined or get benched! #Reds


@CincyGy: “@kelimepie: I know it's early, but seeing Stubbs doing this gives me hope. #Reds” I hear that! He's got to find some plate "smarts" ths yr!


@CincyGy: “@cincywxpro: @CincyGy Welcome back Marty Brennaman lol” and u know this! Thoughts and prayers to all those back home #Tornadoes


Game 1 in the books, What we learned:


- The Boys will hit., Capt Rolen, Votto, Bruce are focused, BP: Glove will continue to rule....(Nice shot by Frazier)
- Heisey's gun is loaded
- The Cowboy is in true Right-Down-Broadway mid season good ol boy flavor..
- Marty B laughing, the sound of summer to come!

Posted by Unknown at 4:17 PM No comments: Links to this post 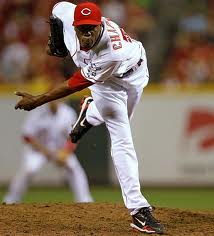 As the world series closes, (if red a... errr butt LaRussa can get his bullpen phone to work, right Tony) its time to ponder 2011/2012 Red Machine.

I'm not sure what else we have to look forward to folks, many Cincinnatians are indifferent and almost accepting of our current team, I will never accept anything short of a championship from my teams, and in that effort we lack the talent to rise to those lofty heights. I knew last year going into the playoffs we didn't have a chance, (ask any who knows me here how I was berated for doubting we ever had the pitching) NO ACE gets you NO WHERE, As we were swept by superior pitching in the Phils. Our only hope this year was one of youngsters stepping up: Volquez/Cueto have the talent but not the maturity, Homer? pffft, never....Wood/Leake, would love to say they could have IT, but they seem more fragile than Capt Scotty Rolens back (hate to say it but the Gold Glover may be finito)

As far as the hitting/defense, since we wont be getting the vaunted "Home Boy" discount from At That Dude BP (aka @DatDudeBP) in the future we will be swinging with Votto(2 more yrs?)/Bruce and the young pups. Young and wild, the free swingers will have to reign in that power and find some smarts if they want to stick, that's you Mr's Alonso/Cozart/Fransisco and of course Mr Strikeout King and once budding lead-off man: Stubbs. There's just way to much immaturity on this squad, so we wait for them to grow up? That was our plan last off-season as we stood by and watched the Brewers Bolster their pitching and where did it get them folks? ;)

I know many of you who will read this (like all 3) wont like my realistic take, but in the infamous words of.......somebody: It is what it is, and we aint what we aint: Contenders.... unless our management steps up, opens the wallet and competes to get that ace (unless The Cuban Missile launches) we will not prosper my friends, all that being said...If Cubs fans can hold on for 100 yrs w/out whats another 2-20 for Cincy?
Posted by Unknown at 11:06 PM No comments: Links to this post

Welcome to Day 1 Game 1 of the Spring: Reds Vs Tribe Goodyear Az Feb 27 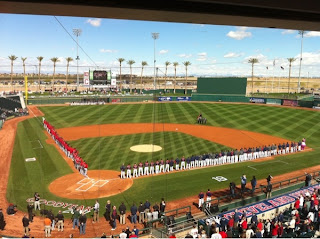 Jay Bruce on label "frauds or fluke": "Talk is cheap. Say what you want. We had to prove it last year. We'll have to prove it again"


And prove it they must: after their NL Central Championship Run last year, andf oh what a year it was, lets not relish in the past. It's time to take a hard look, grip some ash, and try to get find out if we have that missing link from the Reds last year: PITCHING! Well that and proving we can beat contenders!

Our Boys still do not have a solid, team recognized shutdown #1, the opener has been given to Volquez, will he rise to the occasion? (Well as of today he cant even pitch in the Bigs: Visa issues) Physically and mentally he should be fine, but a #1? The same question can be asked of any of our young guns, who will lead this staff: Leak, Wood, Cueto, Bailey? Sorry ladies Arroyos hair and #2, #3 stuff is consistent but not #1 stuff. Yes the Missile is to be reckoned with, but as we see in the Pen, even the Reds do not count him as a team leader or #1. Still will be fun to watch! Cordero: slimmer, trimmer, but consistent? soon to see! As you see our bigegst Question ? Is still here folks! But as evidenced in early performances last year: Leakes amazing start, followed by Woods arrival, and now props shown to 'Quez, we could have a quick answer ;) !

All year folks said the Reds would wake up in the playoffs, and all year these pages of the PRM cautioned them and realistically noted we DIDNT beat contenders( a well publicized sub .500 record Vs winning teams). For those of you who said it didn't matter, I hope Phillys sweep + no-hitting our boys proved our point and rather quickly.

The largest cliche thrown out that proved our point: Good Pitching beats good Hitting! As the sweet swinging Reds bats were cooled, and our pitchers showed up proudly we were still no match against the Phillies. So what must happen: Pitching!

As MVP Joey Votto notes here thats the elixir for the Reds: http://atmlb.com/gGyaTX

The sticks will be here, as Joey sais our boys are older, hitting their prime, lets hope the maturity in our Pitchers, arms, minds, and hearts are ready, for I can confirm Reds fans nations wide are Ready!

But let us dwell on the positives now as in spring: Hope Springs Eternal, and as heard across the Computer "Airwaves" this morning the 27th of February: "The Reds are on the Radio!'

p.s. In game update: Reds first hit of the spring via: The Captain Scotty Rolen! Leadoff single, and from the voice of the Reds one HOF'er Marty Brennamen: "And here comes Jay Bruce"...Gotta Go! Play ball!
Posted by Unknown at 12:34 PM No comments: Links to this post 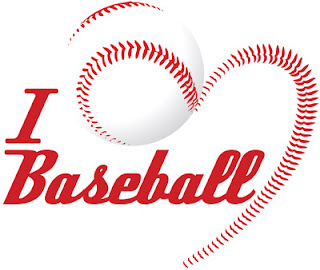 Posted by Unknown at 11:18 PM 2 comments: Links to this post 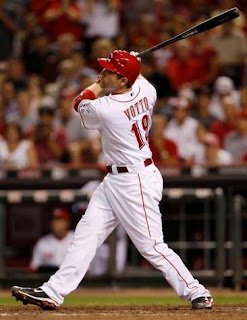 “@CincinnatiReds: Votto overwhelmingly wins MVP with 31 of 32 first-place votes.”
Posted by Unknown at 11:14 AM No comments: Links to this post 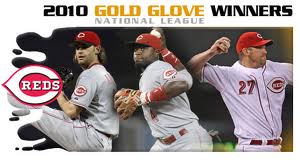 (Cue Music) " The Reds are on "Your Winter Hot Stove" Radio!" reports link with Marty B(w/Jr filling in) Cure those winter blahs! :) http://bit.ly/9ttvzq (< Clict there for Webcast from first 2 Nov broadcasts)


Reds multiple Gold Glove winners Rolen/BP/Arroyo for the first time since the mid '70's when Bench/Concepcion/Morgan/Geronimo 1974-77 were cleaning up!


@CincinnatiReds
Great to see Jay Bruce's walk-off homer to clinch the division for the #Reds was #1 on @MLBNetwork Capital One Plays of the Year!


Well be back after Dec25 with more Winter Highlights! (oh yea except for huuuuge MVP tweets! Hopefully on Monday Nov22)

Posted by Unknown at 12:25 PM No comments: Links to this post

We had a Great time in Seattle(Even though the King and Lee put fisticuffs on our Lumber!) Pics below:Flickr Pics: http://www.flickr.com/photos/50368114@N07/