In Cincinnati, baseball has always been less a sport than a kind of psychosis. It is to the natives what bullfighting is to the citizens of Madrid, and is approached with the same passionate enthusiasm and subjected to the same universally expert consideration. There is, I feel sure, a larger percentage of true baseball aficionados in Cincinnati than in any other city in the country.-- Shine BallJames A. Maxwell

"Brawl at the Wall" 2010, Cause: Yapping, Effect: RIVVAAALLRYYY! 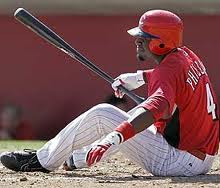 I hold MY Reds players accountable, accountable when they hit .230, or open their mouth: only inciting another team and giving them plenty of fodder, bullpen posting/motivating material: a #1 No-No in sports! Especially in the heat of a pennant race, especially to an underachieving team, let ‘em sleep! And take advantage of them with your bats, not your mouths!
Is BP a nice guy? I don’t know but I hear he is: Paul Daugherty said it, in the heat of the week mind you: Brandon took everything the Reds have preached and practiced for 4 months and drove a nail through it: http://bit.ly/dqqKX7  Nail in coffin analogy work here? Of course not, more like a temporary thumb tack in the pants.
BP started the Fire, Molina fueled it, and unfortunately Cueto he had to go Chan Ho Park: on camera! The fight was pretty fair until the spikes went in the air. Remember BP at the All-star game: "1st 2 third that's what we do" what is it now "Fight and talk that's what we do" ? Sorry I'll take the former!
Some question whose side I am on here: I am on the side of Reds winning baseball, what BP did was ultimately counterproductive, making words, not baseball the focus. I would have had BP's back in the fight but he would never talk through the media again after our closed door clubhouse meeting. Our series against the Cards could have been very different. But it ended up being about fighting, suspensions, losing a three game series. When you play lightning rod,  now your teammates have the added responsibility of of backing you up AND beating the other team: takes focus of the game,  Folks that dont get this, dont get the TEAM concept.
But yes "Phillips apologist" of course I understand this was only one series with 40 somethin’ games to go. And yes I believe they brought their best physical abilities, we did not, and gave them an edge on the mental side. Yogi said it best: "Baseball is 90% mental the other half is Physical" then we gave those "little doggies" a brand new edge against us that did not exist before the comment. Is this great for baseball? YES! Is it fun to watch heated teams frustrations being released: YES! Was it fun to watch Cuetos spikes popping Larue’s magnum: HECK NO! Was it fun watching the main perp go 2-13, NOPE! Is a new reason for rivalry and competition between your division rival exciting: YES ! Did the sweep by STL ultimately cause to much finger pointing: perhaps.
There is one more series with these buzzards and plenty of baseball, after a decade of division domination by STL, it would have been nice to start to bury them this week, and we could have! We had all the momentum coming into that series, (Sweeping Lou's crew) and yapped it away. We can hit anyone, if mentally locked in, so im not buying some of the "they outplayed us " completely, because an edge was giftwrapped to the Cards. The nation outside of Cincy all said the Reds yappers got the karma they played into, well maybe this will turn into our karma next time! ;) Phillips played right into Larusa’s need to motivate the sleeping "little puppies" it was a big series, the last one before what could be THE series against St Louis Sept 3-5. If STL wins this division, some are saying Phillips will be STL's MVP!
Another regional perpsective on yapping: "You got an alligator mouth and hummingbird ars". http://tinyurl.com/2wpvkhr  BP your mouth wrote checks that your bat didn't cash. (To BP's credit he stood by by his comments, and, after he provided all they needed with the "beaaaaches" comment he did compliment the Cards organization) Have they whined about their perceived unfair Reds home field advantages, sure, do you yap it to the media, no, you use it to self motivate.
I am not a working shill for the Reds, or afraid to keep my boys in check, which keep some on here from critiquing them, blindly supporting a Red no matter what. I told someone on twitter (that has since not talked to me when they called me out for "berating" the Reds) that this is tough love, like sitting down a younger brother that does something stupid, gets in a fight, (of course I step in to try and keep the thugs off him; ie Capt Rolen) and after he's cooled off you explain to him how ill conceived it is to take your advantage away and hand it to your adversary. "Speak Softly" sounds kinda boring, but carrying a BIg Stick doesn't! Disrespecting your opponent: through the media? Silly, immature, and who looks laughing with the sweep: Cards fans! BP you owe us next time! ;)
Moral of the Story: Yet to be seen. Will BP learn from this? Does he want to? Will he observe his more consistent teammates play on the field, talking with sticks and not grills? In this one guys "Loyal to Team only" opinion: I hope so!
(Major Caveat I'd like to add 5 hours after posting: I'm sure I dont know BP or what makes him tick, his comment is something we all may feel about some of the Cards players, but its just the way/how, and when he expressed himself that incited the Cards. I think him tapping Molina was his way of sayin, "hey not all u guys are "beaaaches" just your knucklehead pitchers", its clear he didn't have anything against Molina, tapping him may have been his way of sayin; "We cool man?" But once you call a team out, even if you meant only a few of em, your stuck. You cant blame Molina for protecting his own, (just like the Reds Bench protected BP) Press on Reds fans!

Meet for the Bengals/Reds/Bearcats/Buckeyes/CBJ contact me at:
e-mail: CincyGy@comcast.net
Twitter: http://twitter.com/CincyGy
We had a Great time in Seattle(Even though the King and Lee put fisticuffs on our Lumber!) Pics below:Flickr Pics: http://www.flickr.com/photos/50368114@N07/